A Journey in Sudan

‘What’s the odds of it going the distance?’

Mike was on full-frown alert as he stood beside Karl in front of a giant chest splurged in primary-coloured floral motifs: if the artist wasn’t four feet high then he was certainly high. Bags, buckets and brown paper packages spilt over its roof, barely contained by gnarled rope, clinging like some crazy creature from the adventures of Sindbad. A scrawny teenager scuttled up the side with our luggage and deposited it on top. As the four wheels supporting the chest implied, this was our bus.

Inside was a confusion of bodies as pantaloons and gelabiyyas brushed against the vibrant colours of African womanhood: canary-yellow swishing into tufa-pink, melting with greengage and gold-embroidered peach, tussled by magenta taffeta. I found a seat near the back, in front of a bulge of luggage that was kept from smothering me by a single strand of string. Turning to greet my neighbour, I was confronted by another hazard. 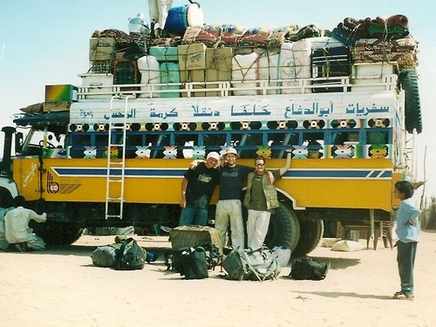 ‘I am constipated,’ he declared.

He waved a packet of pills, patted his girth, and introduced himself. Othman was certainly the fattest passenger on the bus, leaving me with the merest sliver of a seat. But at least I had a seat. In the aisle, some of the more slender passengers had been relegated to a standard of travel that must have contravened the Geneva Convention on Human Rights. They squirmed on metal bars cushioned with strips of card, or on rolled-up carpets corrugated over boxes. They looked uncomfortable before the bus lurched into life. As they were subjected to the unrelenting shudder that comes when you forget to fit a shock absorber, I tried to work out how many hours they had before they would die. But there was a group of hangers-on (‘passengers’ is too fancy a name in this instance) whose circumstances were even worse. They were, literally, hanging on: clinging to the sides and rattling against the empty windows as we crashed into the sand dunes. As if adapted from a medieval morality play, their flapping bodies enacted a grotesque mime of the movements of the bus.

The journey started auspiciously enough. Women sprinkled us with tins of water – an old Sudanese custom. But their charms didn’t stick. Within the hour, we stopped beside a lagoon framed in yellow grass and pinnacles of rock. Our driver urged us out and set about repairing a flat tyre. He hadn’t a spare, so the only solution was a second cover. But he did have help: the young men who were being persecuted on the sides of the bus weren’t there simply to chastise us for the luxury of seats. They dropped to the ground and threw themselves at the undercarriage, banging about with a tool-box, while we milled among the rocks.

It was a splendid setting. Some splashed in the water, dipping their feet or dousing each other. Some slouched on the rocks, which were like cushions compared with the seats on the bus. A seer-like figure with a big nose, called Muhammad, motioned to his troop of young men, and indicated the direction of prayer. They froze at even spaces across the shore, facing a far-off shepherd who guided his goats between schist-like black peaks. In a chorus, they declared the tenets of Islam, and endorsed them with one synchronized movement that left them planting devout lips against the tangled fruit on the banks of the lagoon. I looked across the vast golden vista: it was a different world from the Middle East. Everywhere there was space, limitless tracts of it, recreating the scale suggested by depictions of Africa in medieval maps. Here was the unknown continent, the terra incognita of Prester John – a world of magic and mirages. 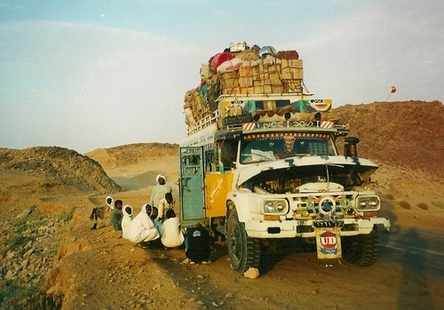 Prayers and repairs complete, we bounced across rutted tracks between swatches of small stones that looked like chain mail. We were in the Batn al-Hadjar, the ‘womb of rocks’. But there was nothing maternal about this womb. If its rocks didn’t repuncture our tyres, the sun burst them. Then the battery went flat and the carburettor died. And when these had all been fixed, and the bus was managing to move at the sort of pace that could be described as ‘forward’, the radiator started hosing rivulets on to the sand. In order to fix it, one of the boys asked Mike for his torch. A couple of hours later, he was handed several pieces of broken plastic and glass.

‘Hmmm,’ he mused, ‘these people have got our lives in their hands and they don’t even know how to use a torch.’

As we stumbled off the bus at each stop, we became caricatures of pain, each time more haggard than the last. I began to wonder if those women with the water tins had cast the evil eye. But the delays did enable us to rest our bones and experience refreshments Sudanese-style. The radiator fracas introduced us to the local version of the Little Chef: a sandstone hut with a square hatch that ejected trays of tea and durra bread (described by the nineteenth-century explorer Johann Burckhardt, with some justification, as ‘coarse, and nothing but absolute hunger could have tempted me to taste it’). Sackcloth rugs took the place of tables and chairs, and their informality encouraged cross-rug chatter. Othman laid out his vast pharmaceutical collection, poring solemnly over every bottle, packet or phial; while our long-nosed neighbour, whose "’ayrick ‘ead of ‘air" had ginger tints, invited us to join him for ‘a week or so’ if we ever happened to be in his neck of the desert.

He was the first Beja we’d met, scion of Rudyard Kipling’s ‘Fuzzy-Wuzzy’ who petrified Lord Kitchener’s troops with ‘the skill ‘e’s shown/ In usin’ of ‘is long two-‘anded swords’. This particular Beja, more pragmatic than his ancestors, worked for a railway company in Port Sudan and traded in cotton. Sadly, he didn’t live in a rectangular goat-hair tent, as I had assumed of all decent Beja (although I should have been alerted by his lack of a cow-skin shield or poisonous arrows). Nor did any of his womenfolk live the warrior life of the Amazons, the subjects of Prester John linked to the Beja by the likes of Selim al-Aswany. The Beja bought their lances, suggested Selim, from women who ‘have no intercourse with men, except with those who come to buy the lances.’ If the children who naturally emerged from such transactions were male, the women killed them, ‘saying that all men are a plague and a misfortune.’ Such an early form of feminism, however odd its attribution to Sudan, wasn’t necessarily unnatural in a country whose women everted their lips at us or laughed (not a Levantine giggle but an African cackle), their confident brown eyes defying us to meet their gaze. 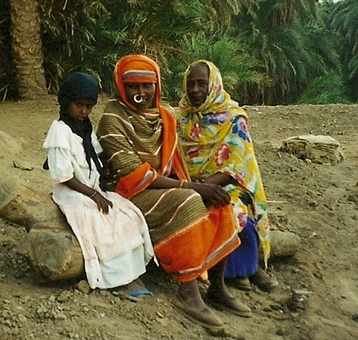 The bus jittered through the night, like an epileptic psychopath who’s eaten a bucketload of raw fuul. Metal bars poked our rips and cut gashes in the boxes. Sharp stitches were lacerating my sides and Othman was looking decidedly unsettled: he was running out of pills. The final insult came, shortly before dawn, when he buried his head in the seat in front, at precisely the same time as the bus crashed into yet another dip. His head swung back and ricocheted against the metal backrest, inspiring the longest, lowest, most excruciating moan I’ve ever heard. Enough was enough: he crawled off at the next stop, never to be seen again.

At the same stop, Karl – the anti-Othman – bounced beside me on a hillock of sand and rearranged his keffiyeh.

It was a depressingly accurate diagnosis. The word ‘travel’ is derived from the Latin trepalium, an instrument of torture consisting of three hooks that rack the body and tear it apart.
To read another extract click here.
Or to read an extract from Drinking Arak off an Ayatollah's Beard, click here.